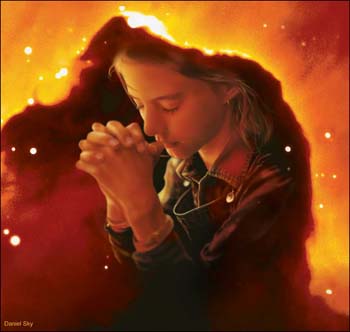 He came to earth as a tiny, weak and helpless baby, born to a simple, humble young girl who miraculously conceived the child, having never been intimate with a man! In fact, the news of her pregnancy was so shocking that when the man to whom she was engaged to be married learned about it, he promptly decided to break the engagement and call off the wedding.—Until a powerful celestial being intervened and instructed him to stay with her and protect and care for this very special child that she was carrying.

Although ordained and predestined to be a king—in fact, the King of kings—He was not born in a palace with famous and glorious members of the court in attendance. Instead, He was born on the dirty floor of a barn amidst the cattle and the donkeys, wrapped in rags and laid to rest in the animals’ feed-trough.

Though His birth brought no great fanfare or recognition from the institutions and governments of men, that night on a nearby hillside, some poor shepherds were awestruck as a brilliant, almost blinding light burst upon them from the starry sky and a host of heavenly messengers filled the night with their joyful declaration and song: “Glory to God in the highest. Peace on earth to men of good will. For unto you this day is born a Savior, Christ the Lord.”

Far away in the East, another herald appeared in the heavens, a bright star that caught the attention of certain wise men. They interpreted its meaning and followed it, crossing many hundreds of miles of desert, as it led them to the exact location of the young child in that little town of Bethlehem, where they honored Him with their precious gifts.

His earthly father was a carpenter, a humble hewer of wood with whom He lived and labored. He conformed to our human ways of life, custom, language and living that He might understand and love us better and communicate with us on the lowly level of our own limited human understanding. He saw mankind’s suffering and had great compassion on them, longing to not only heal their sick and broken bodies, but also to save their immortal spirits.

When the time came and He began His life’s work, He went about everywhere doing good.—Helping people, loving children, healing heartaches, strengthening tired bodies, saving all who believed in Him. He not only preached His message but He lived it amongst us. He not only ministered to their spiritual needs, but He also spent a great deal of time ministering to their physical and material needs, miraculously healing them when they were sick, feeding them when they were hungry, and sharing His life and His love.

His religion was so simple that He said you must become as a little child to receive it. He didn’t preach temple worship; He didn’t preach going to synagogue or going to church. He preached love for God and fellow man and manifested God’s love, as He strove to lead God’s children into the kingdom of God, whose greatest commandments are to “love the Lord with all your heart” and “love your neighbor as yourself.”

He was not a mere religious reformer, He was a revolutionary. He shared His love with the poor and common folk. He made Himself of no reputation, and shared His message with sinners, the outcasts, and downtrodden of society. He even said that they would enter the kingdom of heaven before the self-righteous religious leaders who rejected Him and His message of love. The power of His love and of His appeal was so great and gave such faith to sincere truth-seekers that they didn’t hesitate to drop everything they had and immediately forsake all to devote their lives to becoming His followers.

Once, while crossing a lake in a small boat with His disciples, when a great storm arose and the boat was in danger of sinking, He commanded the winds and the waves to cease—and immediately there was a great calm. His disciples, astonished by such a demonstration of miraculous power, exclaimed to one another, “What manner of man is this, that even the winds and the sea obey Him!”

Throughout His ministry He gave sight to the blind, hearing to the deaf, cleansed lepers and raised the dead. In fact, so marvelous were His works that they prompted a leading member of the religious establishment that most bitterly opposed Him to exclaim, “We know that You are come from God. For no man could do these miracles that You do unless God were with Him!”

As His message of God’s love spread and His followers multiplied, the established religion and its jealous leaders realized what a threat He had become to them. His simple doctrine of love was liberating the people from the control of the high priests, and was therefore destroying their entire religious system, their authority, their power, and their hold on people.

These powerful religious enemies finally had Him arrested and brought to trial on false charges of sedition and subversion. Although the Roman governor found Him innocent, he was pressured and persuaded by these religionists to execute Him. Just prior to His arrest, He had said, “They couldn’t even touch Me without My Father’s permission. If I would but raise My little finger, He would send legions of angels to rescue Me.” But instead, He chose to die, to save you and me. Nobody took His life from Him, He laid it down; He gave His life of His own free will and accord.

But even His death did not satisfy His jealous enemies. To ensure that His followers couldn’t steal His body and claim He had come back to life, they placed a huge stone over the door of His tomb and posted a detachment of Roman soldiers there to guard it. A scheme that proved futile, as these same guards became eyewitnesses to the greatest miracle of all. Three days after His lifeless body was laid to rest in that cold tomb, He rose from the dead, the victor over death and hell forever!

Death itself could not stop His work or His words. He rose to lead His tiny band of followers to overcome the Roman Empire with love and the power of the Gospel. Since that miraculous day over 2,000 years ago, this same man, Jesus Christ, has done more to change history and the course of civilization and the condition of man than any other leader, group, government, or empire before Him or since! He has saved billions from the fear and uncertainty of a hopeless tomb, and has given eternal life and the love of God to all who call upon His name.

Jesus Christ is not merely a philosopher or teacher or rabbi or guru, or even a prophet. He is the Son of God. God, the great Creator, is a Spirit and is all-powerful, all-knowing, everywhere and in everything—far beyond our limited human comprehension. He sent Jesus, in the form of a man, to show us what He is like and to bring us to Himself. And although many great teachers have spoken and taught about love and about God, He is love and He is God.—The only one who died for the sins of the world and rose from the dead. He’s in a class all by Himself, because He’s the only Savior. He said, “I am the way, the truth, and the life. No man comes to the Father but by Me.”

How can you find out and know beyond a shadow of a doubt that Jesus Christ really is the Son of God, the way to salvation? The answer is simple: Try Him. Simply humble yourself and sincerely ask Him to reveal Himself to you. Ask Him to come into your heart, forgive you for all your sins, and fill your life with His love, peace, and joy.

He’s real and He loves you. So much so that He died in your place and suffered for your sins, so that you would not have to, if you’ll just receive Him and His free gift of eternal life. But He can’t save you unless you want Him to. His love is all-powerful, but He won’t force His way into your life. He gently knocks at the door of your heart. He doesn’t kick it in or break it down. He stands there meekly, in loving patience, waiting for you to open up and ask Him in.

Will you receive Him? If so, He will be the most precious one in your life, your closest friend and companion who will be with you always. For He alone is the lover of all lovers, who came for love and lived in love and died for love that we might live and love forever.

You can personally receive Jesus into your own heart right now by sincerely praying this simple prayer:

Dear Jesus, please forgive me for all my sins. I believe You died for me. I believe You are the Son of God, and I now ask You to come into my life. I open the door and I invite You into my heart. Please come in, Jesus, and help me to confess You before others that they may find You too. In Your name I ask, amen.

TFI Online is a community site for members of The Family International. TFI is an international Christian fellowship committed to sharing the message of God’s love with people around the globe.

Visit our main website if you would like to know more about what TFI is all about.